As the curtain from the only opera Chagall ever fashioned sold for almost a million dollars this week, we’re looking back at possibly the best stage design of all time.

Seeing art go to auction and imagining the pieces in your home is a favorite past-time of many, but some pieces are so large that they couldn’t possibly fit in a single story of any building — Marc Chagall’s curtain for Mozart’s “The Magic Flute” (Die Zauberflöte) is one of those pieces. At the height of a six-story building, Chagall’s curtain is breathtakingly expansive, roughly 65 feet tall by 44 feet wide, and is a symbol of its time. On November 17, it was put up for auction in New York by Bonhams with an estimated selling price of $250,000 to $450,000, selling for more than double the high estimate, $990,312 (including premium). In addition to this curtain and its journey to auction, the story of Marc Chagall and his role in the production of “The Magic Flute” are relics of time in and of themselves, weaving together the fabric of such a monumental work.

Marc Chagall (né Moishe Shagal) was born in Lionza, Belarus, in 1887, where he lived until 1906 when he moved to St. Petersburg, Russia, to study art. During this time he was an apprentice to the famed Ballets Russes designer Leon Bakst, however, he never worked on an opera until he arrived in the United States — a move he and his wife Bella made as World War II refugees in 1941. Even as he created inventive works for some ballets in the 1940s, he was hesitant to enter the world of opera. Chagall’s friend and the General Manager of the Metropolitan Opera, Sir Rudolf Bing, had attempted to persuade Chagall into designing a number of ballets and operas, including Verdi’s “Nabucco,” for the next two decades, all of which he declined. It wasn’t until Mozart’s last opera, “The Magic Flute,” that Chagall accepted.

Despite being a lover of music, “The Magic Flute” would be the only opera set Chagall ever designed, possibly because, above all else, he was a fan of Mozart, and wouldn’t have wanted to work with anyone else. It’s been said that Chagall once declared, “There is nothing on Earth that approaches those two perfections, ‘The Magic Flute’ and the Bible.” His work on the set of “The Magic Flute” was a celebration of the composer that required great time and detail. The project, which was somewhat of a collaboration between Chagall and Russian designer Volodia Odinokov, took three years to complete and resulted in 121 costumes and masks, 26 stage objects, and 13 colossal backdrops. During those years, Chagall worked from morning until night, drawing and painting his signature swirling motifs of animals playing instruments, angels holding trumpets, and whimsical figures floating through space. 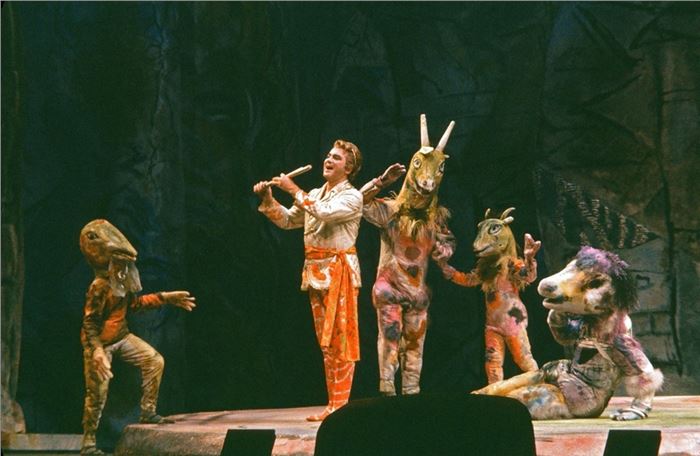 Chagall’s costumes were lively and beautiful, with feather-covered birdcage suits and hand-painted silk, chiffon and linen, blending together colors like dusty rose and aubergine with cobalt and vibrant oranges with Earth-tone greens. Many saw his style as a symbol of hip counter-culture — a sentiment that has been echoed through decades of adaptations. The costumes in the most recent adaptation of the production, performed at Glimmerglass Festival in 2015, were made of pieces like a sweater skirt from Brooks Brothers and a neoprene coat likened to Alexander Wang, highlighting Chagall’s fashion-forward thinking. His work transcended the already impressive feat of existing as paintings wrapped around bodies, and also managed to serve as subtle inspiration for prints and palettes used by contemporary fashion houses and designers.

His production design, while undeniably thrilling, received mixed reviews. For those who came for the art, it was perfection. Some 50 years ago, Alan Rich, a writer for the 'World Journal Tribune', noted that those audience members would applaud wildly with each scene change, adding another distraction for opera-goers who were there strictly for the music. By the end of the evening, he said, “many members of the Metropolitan Opera House’s audience were convinced that Marc Chagall had not only designed the new production of ‘The Magic Flute,’ but had also composed the music, written the libretto, sung the major roles, and conducted.” He even went as far as to say that the experience was more like a trip to the Met with a Mozart opera “thrown in as a bonus.” Other reviewers were far less lighthearted, like the 'The New York Times'’s chief music critic, Harold Schonberg, who complained that the audience was too busy “trying to count the number of the figures in the backdrop” to actually listen to the opera. 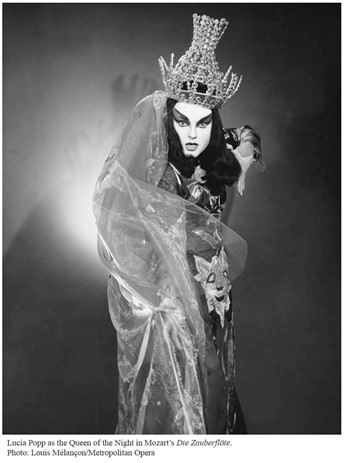 Be that as it may, Chagall’s “The Magic Flute” remained in the Metropolitan Opera House’s repertoire for 24 years, and even after, the sets were brought out on occasion for black-tie events, dinner parties, and dances for Met patrons. Furthermore, the production has been adapted many times over the years, with the Chagall-designed version maintaining its position as one of, if not the most famous of them all. The newly auctioned curtain was used for the final act of that production, making it a memorable symbol of a famed moment in time. It wasn’t sold by the Met until 2007, just before the financial crisis caused them to put up the set’s murals in the lobby as collateral for a loan. 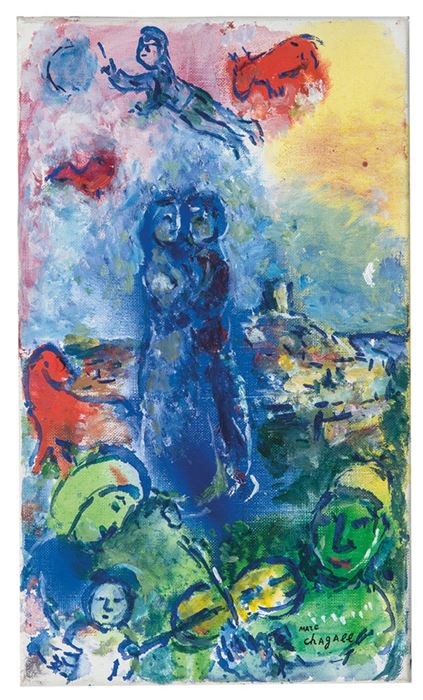 The curtain now came from the estate of Gerard L. Cafesjian, the publishing mogul and founder of the Cafesjian Center for the Arts, a prominent museum in Armenia. The late art collector and philanthropist purchased the work privately at Sotheby’s when it was auctioned in 2007. Before the sale it remained at the Metropolitan Opera Lincoln Center, where the production premiered, for four decades. Upon his purchase, Cafesijian hoped to hang the curtain in his museum, located in the Armenian capital of Yerevan. Unfortunately, due to its massive size, it was impossible to make the space for it. The curtain was carefully folded, returned to its custom-made crate, and shipped back to New York, where it remains today, far too large to be present at auction or brought home without a 65-foot ceiling.