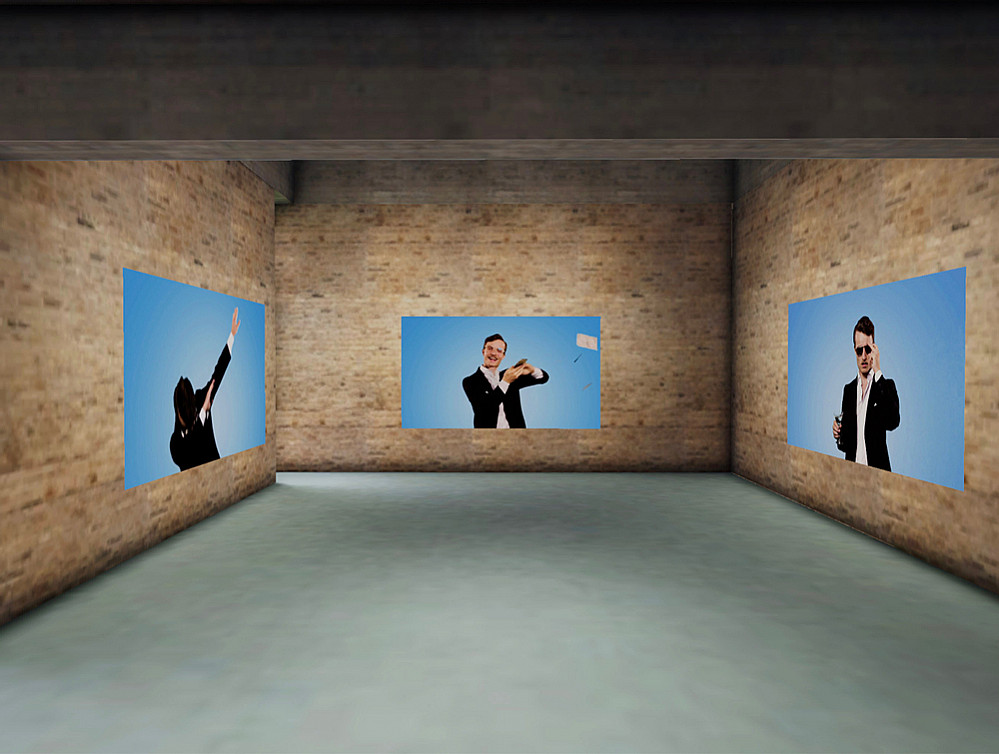 KÖNIG GALERIE presents the digital solo exhibition 'NEVER NOT WORKING, ALWAYS LOVING' by the German concept artist Andy Kassier in Decentraland, a virtual world based on the blockchain.

A picture is worth a thousand words. The Internet has internalized this saying. Instead of words, GIFs and memes are often used to express a feeling. Andy Kassier helps out with a series of GIFs that get up to 250 million views and a total of 850 million views in the online database and search engine Giphy. In the exhibition, his ten most successful GIFs are shown like in an endlessly repeating flip book.

In the mid-1990s, GIFs made it possible for static websites to move. GIFs 1.0, the “cave drawings of the web” (Tilman Baumgärtel) were little cartoon-like animations that consisted of a few pixels. When GIFs experienced a renaissance in the late 2000s, shared on web forums like Reddit and 4Chan and social media like Twitter and Facebook, they were looped screengrabs from movies, series and amateur videos. Like memes, GIFs had no owners, they were created by users for users, their creators are mostly nameless.

Kassier joins the crowd of anonymous creators and makes himself a “model for shaky images on the Internet” (Spiegel) when he provides GIFs with the aim of viral distribution. He lets money rain, claps, drinks coffee, casually puts on sunglasses and sticks a rose between his teeth. Kim Kardashian and Andy Kassier are in the top ten of the most popular “Money GIFs”, and on Tinder he often uses roses to convey love messages. The artistic intervention using a mass medium generates anonymous fame, which is linked to the artist's person and alter ego in the context of the exhibition.

In 2013, Andy Kassier created his alter ego Andy Kassier, who ironically breaks the narrative of wealth and happiness in late capitalist society. On Instagram and in international solo and group exhibitions, he continuously develops the long-term performance according to the current zeitgeist. How does photography change in the digital age, when images become the medium of communication and at the same time the medium of photography is expanded through performances and livestreams? In exhibition spaces, Kassier sets up installations and performs and streams live on social media.

Andy Kassier (* 1989) lives and works in Berlin. His work includes installations, performances, photography, videos, sculptures and painting. In 2018, he graduated with distinction in Media Arts from the Academy of Media Arts Cologne, where he studied with Mischa Kuball and Johannes Wohnseifer, among others.

Kassier observes phenomena in social media and the development of digital image cultures. Based on his findings, he searches in his artistic work for answers to currently socially relevant questions: What is happiness? ("the science of happiness", Pop; 68, Cologne, 2016) How do I become successful? ("On the Internet, Nobody Knows You're a Performance Artist. Andy Kassier and Signe Pierce", NRW- Forum Düsseldorf, 2018) How is masculinity portrayed? ("How To Take A Selfie", Goethe Center Baku, Azerbaijan, 2019) How do I accept myself? ("Link in Bio. Art After Social Media", Museum der bildenden Künste Leipzig, 2019/2020) What is the role of the artist in the digital age? ("palm down", HANZ.studio, Gallery Weekend Berlin, 2020.

For more information, to plan your visit or to access the Saleroom, please navigate to The KÖNIG GALERIE website here